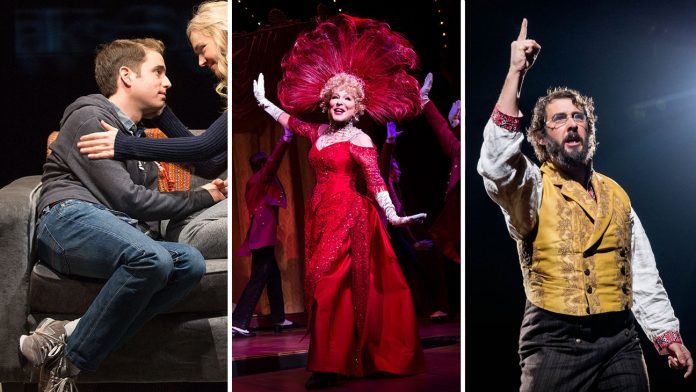 The 71st Annual Tony Awards was awarded at the Radio City Music Hall in New York. The night was a glittering affair with an array of stars who were presenting and receiving awards. The best of Broadway talent had gathered to celebrate the best in a theater production on Sunday.

It was one of the Broadway’s biggest nights, and there was performance by stars which was peppered intermittently by host Kevin Spacey’s impersonation. Kevin turned out to be a perfect host, and after impersonating Ben Platt, he was joined by Stephen Colbert who was impersonating as a groundhog mask in homage to the nominated musicals, Groundhog Day the Musical. Whoopi Goldberg embraced Spacey and was soon joined by Radio City Rockettes, to give their rendition of “Welcome to the Rock.” Spacey was also joined by former Oscar host Billy Crystal

“Dear Evan Hansen” grabbed six Tony awards including the award for the best new musical. Broadway has evolved into something big and complicated; “Dear Evan Hansen” is deliberately tenacious and close and was staged in a comfy 984-seat theater. Directed by Michael Greif and is not based on any past work or a book.

Bette Midler was adjudged the Best Leading Actress. The best new play was won by “Oslo” a slick drama set in the 1993 Middle East Peace Talks. “Come from Away,” a new musical won an award for its director Christopher Ashley. Rebecca Taichman also got then director awards for the play “Indecent.”

The award for the Best Musical Revival prize went too “Hello Dolly.” Starring Bette Midler who also won the best actress award, the play evoked the nostalgia of those times. The 2017 Tony Award for the best new musical was awarded to “Dear Evan Hansen,” a boldly unwavering examination of defeat, deceit, and solitude in a high school community. It also won Ben Platt the best leading actor for his performance which became the talk of the town.